Environmental magnetism aims to characterize the variability inherent in the environment. We use magnetic methods to aid in the interpretation of the environment, operating both at the present day and in the past. With careful targeting these techniques can potentially yield higher discriminatory power and resolution than can be afforded by more traditional characterization methods. The scope of environmental magnetic applications is very broad and rapidly spreading. Initial studies were concerned with lake sediment sequences but common applications now include core correlation, sediment tracing, geological delineation and mapping, environmental change and reconstruction and studies of paleoclimatic, paleoseismic, paleoenvironmental and diagenetic variability. Almost every project currently underway in the P-mag lab includes an environmental magnetic component. For example, we are fingerprinting suspended sediments draining the Greenland Ice Sheet into the North Atlantic Ocean. Additionally, we are using a series of deep-sea sediment cores from the North Atlantic to trace the relative effects of ice sheets and changes in bottom water circulation during the Holocene and into the last deglacial period.

The magnetic properties of sediments are largely a reflection of sediment transport processes, sediment sources, and sediment diagenesis.  The OSU P-mag Lab has a number of ongoing projects that aims to better understand the relative importance of these factors through use of particle size specific magnetic measurements.  For example, Rob Hatfield and Joe Stoner have found that magnetic coercivity (or ‘grain-size’) changes in Northern North Atlantic sediments is largely influenced by sediment source by studying the magnetic properties of only the silt sized fraction (Figures 1 and 2).  In this case, magnetic minerals from Icelandic silt are generally included in silicate minerals and appear ‘finer’ than their physical particle size, while magnetic minerals from Greenlandic silt are generally free particles and are magnetically coarser.  This observation has been applied to better understand the response of the Greenland Ice Sheet during past warm interglacials (see Hatfield et al., 2016, Earth and Planetary Science Letters).

Magnetic minerals in marine and lacustrine sediments are often sensitive indicators of changes in past environmental conditions.  One way is as a tracer for sediment source.  For example, in 2015 Jason Dorfman, Joe Stoner, and colleagues published a study in Quaternery Science Reviews documenting down core changes in the magnetic mineral assemblages at Burial Lake in Arctic Alaska.  They found, using the S-Ratio parameter which is sensitive to the concentration of hematite and other high coercivity magnetic minerals, that the lake recorded the timing and magnitude of regional dust deposition. 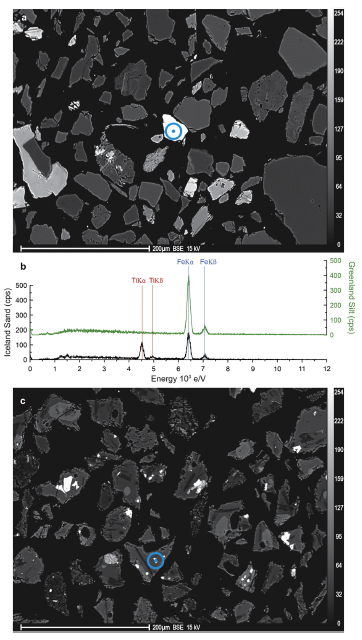 Figure 1: Backscatter electron images of river silts collected from Greenland (top) and Iceland (bottom).  Fe-Ti oxides appear as the brighter regions due to their higher atomic numbers and are typically free magnetites in Greenlandic samples and included (titano-)magnetites in Icelandic samples.  Rob Hatfield and colleagues in 2017 demonstrated how this difference can be used to better understand sediment source contributions to Northern North Atlantic sediments in their paper in Earth and Planetary Science Letters.