The OSU P-mag Lab’s study on Late Pleistocene Western North American Paleomagnetic Secular Variation (PSV) is now available online at Quaternary Science Reviews.  It is titled, “Regionally consistent Western North America paleomagnetic directions from 15 to 35 ka: Assessing chronology and uncertainty with paleosecular variation (PSV) stratigraphy” and is the result of work that began with sediment cores collected in 2014 from Fish Lake, Utah.  You can access the paper for free until December 12, 2018 using the following share link: https://authors.elsevier.com/a/1XxYs-4PRq9MZ.  If you need a copy after that, just email Brendan, Joe, or Rob and we can send you a version.

In February 2014, Joe and Rob traveled to Utah to collect sediment cores from the frozen surface of Fish Lake, the largest natural mountain lake in the state, with colleagues from the University of Pittsburgh, Western State Colorado University, University of Utah, the USGS, University of West Virginia, College of Charleston, and the Illinois State Museum.  Fish Lake is situated in a northeast-southwest trending graben in the high plateau of Utah, a transitional region between the Colorado Plateau and the Basin and Range. During the last glacial time interval, glaciers drained from the nearby Fish Lake High-top Plateau into the Fish Lake Basin without overrunning the lake. Thus, sediments in the lake contain a record of times before, during, and after the last glacial maximum.

The Fish Lake coring team in February 2014 using a UWITEC coring device from the frozen surface of the lake.

Joe and Rob returned to Oregon State with 12 ~2 meter long cores from the lake, which could be used to build an 11 meter composite record of the lake sediments. Brendan, Joe and Rob then scanned the sediment cores using a medical CT scanner and measured the magnetic properties of the sediments.  These measurements were used to develop a composite stratigraphy for the lake. 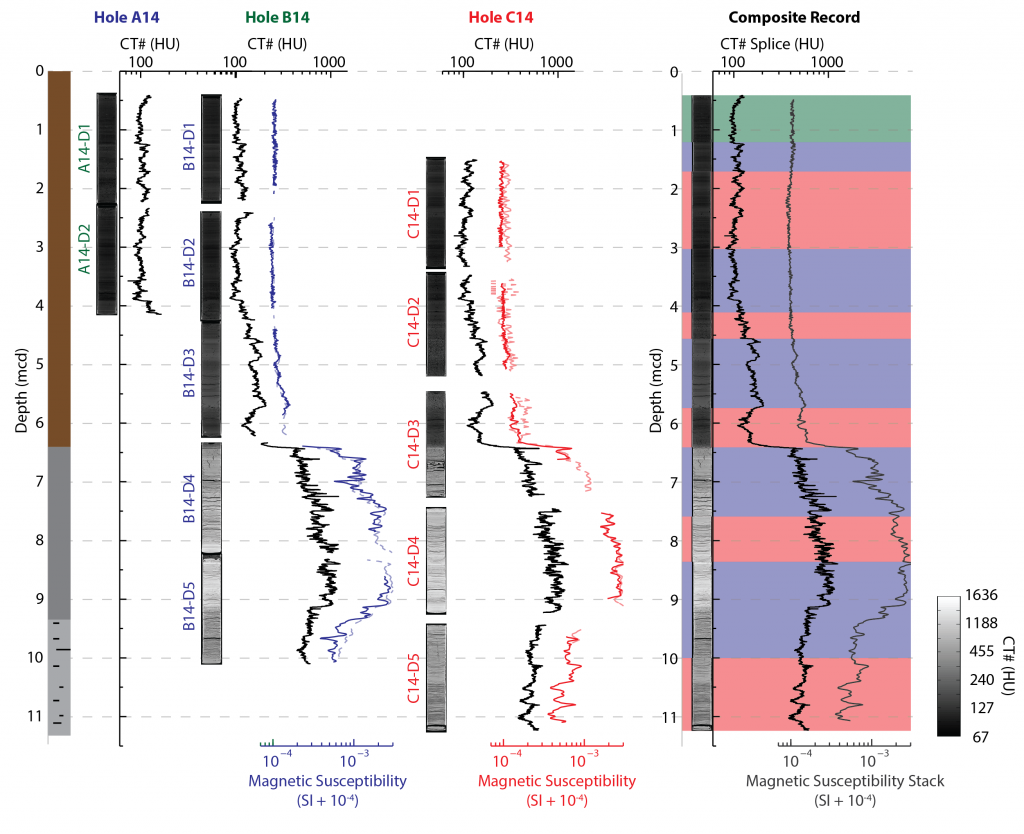 The stratigraphy of the upper 11 meters of sediment recovered from Fish Lake, Utah.  On the left, are the general lithologic units recovers, including glacial-influenced (gray) and not glacial-influenced (brown) sediments. Each core was recovered from one of three holes (A14, B14…) in a series of drives (D1, D2,…).  At Oregon State, the cores were scanned using a CT scanner, which gives an x-ray ‘slice’ through the center of the core and can be used to calculate CT numbers that track relative changes in sediment density.  The cores were also measured for magnetic susceptibility, which tracks the concentration of magnetic minerals.  On the right, is a composite record from Fish Lake constructed using the CT and magnetic data.  Figure from our 2018 QSR paper.

A closer look at the CT data from Fish Lake, Utah show beautiful sedimentary structures and reproducible CT# (relative sediment density) variations in parallel cores, allowing for a detailed correlations in the construction of the composite record. Horizontal scale is depth in centimeters. Figure modified from our 2017 G-Cubed paper.

The sediments were quite beautiful and record a history of the region’s environment, climate, glaciers, and magnetic field. This recently published study focused on the latter, particularly using past directional variations of the magnetic field (inclination and declination) or Paleomagnetic Secular Variation (PSV) to correlate records from different basins throughout the region. Finding a common signal with a number of other records for the Late Pleistocene , we set off to assess and improve the chronologies using PSV as a synchronization tool.  This provides a means to assess chronologic uncertainties that are otherwise difficult to evaluate using one site alone. 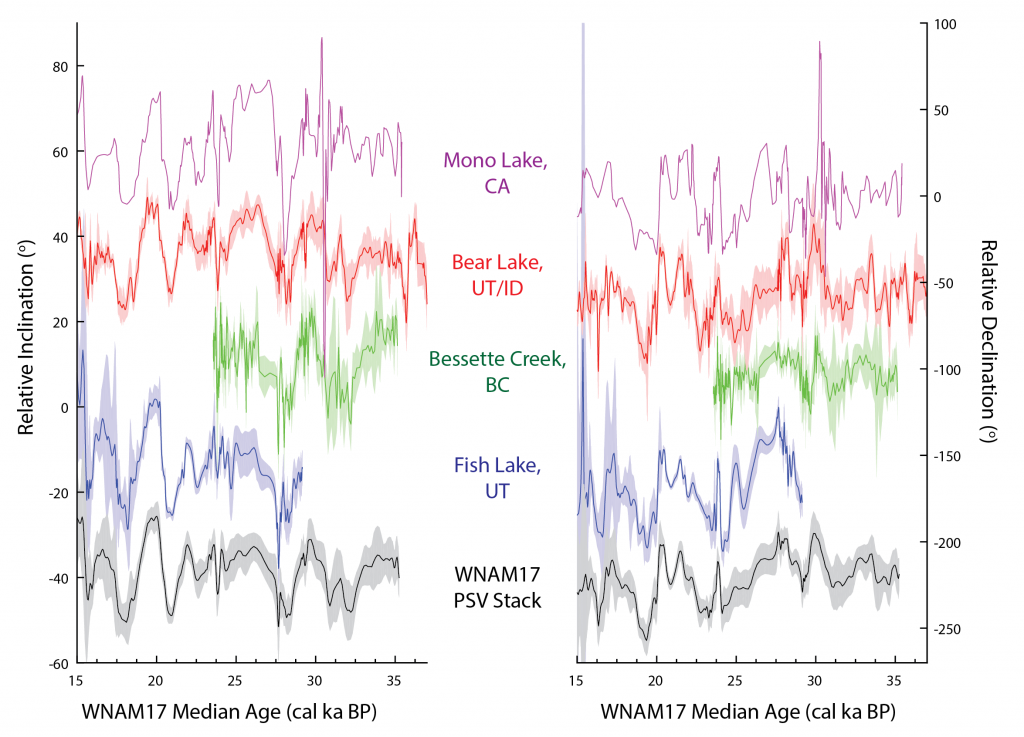