Next week, Joe, Brendan, and Mo will head to Thule, Greenland to sail on the Swedish Icebreaker, Oden, to Nares Strait and Petermann Fjord.  The field project will include sea floor mapping, marine sediment coring, paleo-shoreline investigation, and cosmogenic exposure dating.  Stay tuned to the OSU P-mag blog for updates and pictures from the expedition and check out the expedition blog, Instagram, and Twitter.

From the NSF award abstract:

This project will take a multi-disciplinary approach to understanding the response of Petermann Glacier in northern Greenland to climate change in the past. Petermann Glacier drains a significant fraction of the northern Greenland ice sheet and terminates in a large floating ice shelf that is sensitive to ice-ocean interactions. Ice retreat over the last decade opens access to the fjord and presents an opportunity to understand sedimentation processes under the area previously covered by ice shelf and to calibrate reconstructions of past ice shelf variations. Using a variety of technologies and approaches on land, ice, and at sea, the investigators will map the bottom of the fjord in front of and under the ice shelf; reconstruct ocean conditions and their role in ice shelf variations through time; reconstruct the past extent of the glacier on land and the floating ice shelf; and reconstruct local relative sea level. Together these efforts will create a comprehensive picture of the climate conditions and response of the Petermann Glacier to these conditions over the last 10,000 years.

Of key interest will be the timing, extent, rates of change, and variability (on land and in the sea) during the early Holocene when local relative sea level was over 100 meters higher than today (due to lagging isostatic rebound of the crust in response to deglaciation), but the inland ice sheet was still large relative to today. The investigators will address dynamic responses to multiple interacting variables over a range of response times (from tens to thousands of years) relevant to potential future impacts. Specific research questions include: 1) How sensitive is Petermann ice shelf extent to documented climate changes within the Holocene? 2) Is shelf response independent of, or linked to, variations in the grounded Petermann Glacier, ocean thermal conditions, or relative sea level (i.e., sill depth)? 3) What are the rates of change and variability of these systems in response to early Holocene warming, Neoglacial cooling, and recent warming? The project will support several young investigators and will provide them with both ship and land-based training experiences. The project includes significant international collaborations, with substantial in-kind contributions from non-U.S. sources that add value to the project. Planned outreach includes teacher participation in the field program and meaningful classroom involvement at several levels. 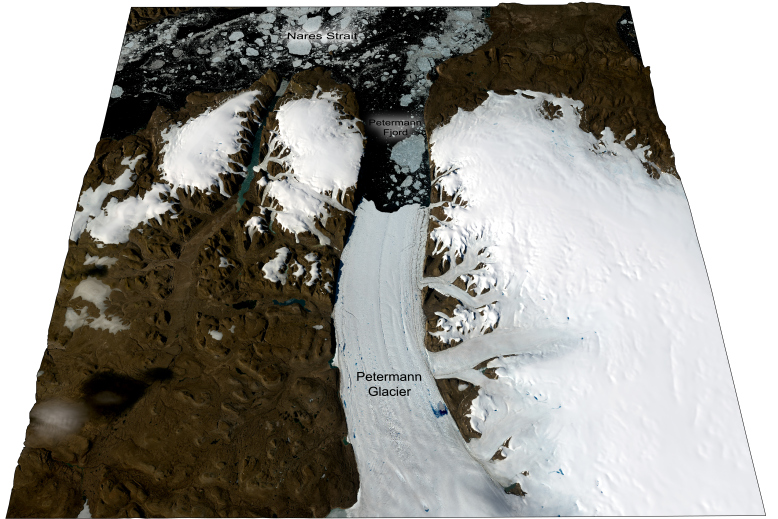